Alma M. Karlin (1889-1950) was a writer, journalist, amateur researcher, polyglot and theosophist from Celje – then part of Austria-Hungary, today Slovenia – with a dual, German and Slovene, interculturally marked identity. A year after the end of the First World War and a month after her thirtieth birthday, Karlin set off on her journey around the world with her modest savings. She travelled alone and continuously for eight years, from 1919 until 1927, making her own living en route, supporting herself by teaching languages, translating and writing articles for publication in numerous European newspapers. The nature of her journey places her among the greatest travellers of all times.

Alma M. Karlin arrived in Japan in early June 1922. Japanese culture, the country’s natural beauty and the Japanese people themselves, left a deep and lasting impression on her. She believed that she had come as close to the Japanese soul as any foreign woman could. She took her leave with a heavy heart on 1 July 1923. As she wrote: “I left the only country of which I can say: no one offended me, no one did me any wrong.” Later, when reminiscing about her journey, she refers to the country as: “My beloved Japan.”

The exhibition is divided into two parts. The first part, entitled “Travelling is Learning”, offers a chronological presentation of her remarkable journey around the world. The second part, entitled “Life is a Journey”, presents her biography.

The exhibition Japan at last! marks the centenary of Alma M. Karlin’s stay in Japan, and the 30th anniversary of the establishment of diplomatic relations between Slovenia and Japan

This exhibition is jointly organised by the Slovenian Embassy in Toyko, the Austrian Cultural Forum Tokyo and the German East Asiatic Society (OAG).

On June 29 there will be a lecture in English by Barbara Trnovec, the curator of the exhibition.
Time: 18:30-20:00
Place: Hall of the OAG House/German Cultural Center

Lecture in English on June 29 by Barbara Trnovec, the curator of the exhibition. Time: 18:30-20:00 // Place: Hall of the OAG House/German Cultural Center
Ausstellungen 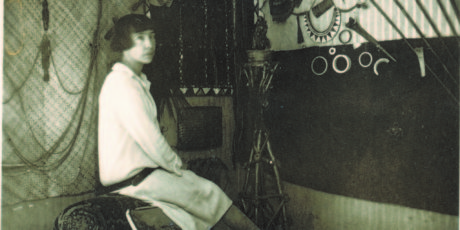