At some point during the year 1863, a former telegrapher recently discharged from the Prussian Navy embarked upon an ambitious photographic career in the British colony of Singapore. Over the next ten years, August Sachtler (c.1839-73) established himself as the foremost commercial photographer in Singapore, eclipsing his better-known competitor John Thomson, and producing an impressive portfolio of landscapes and portraits ranging from intimate carte-de-visite size prints to imposing panoramas formed of multiple large format prints. Equally adept in the field as in the comfort of the studio, Sachtler undertook a series of photographic expeditions, each more ambitious than the last, from his base in Singapore, crisscrossing the mainland and maritime regions of Southeast Asia. An album of Sachtler’s work submitted for display in the 1867 International Exposition in Paris was praised by his compatriots for the ‘holistic impression’ (Totaleindruck) it offered of the remote lands of ‘Further India’ (Hinterindien). By the time of his premature death in April 1873, Sachtler had created a successful brand that was synonymous with the photographic documentation of the Malay Archipelago and Indochina and had lived just long enough to see his work achieve mass circulation in the British illustrated press.

Although Singapore was Sachtler’s chosen field of operation, his photographic career had begun almost accidentally in Japan and China while he was serving in the naval squadron that accompanied the Prussian Expedition to East Asia during 1860-62. A succession of important commissions from the head of the expedition, Count Eulenburg, and its artist, Wilhelm Heine, gave Sachtler sufficient experience and confidence in his ability to claim privately for himself, despite his lowly rank in the Prussian Navy, the title of ‘artistic photographer’ under which he later established his public persona as a successful studio operator in Singapore.
This lecture will consider the place of August Sachtler in the early history of photography in Southeast Asia and the fortuitous role Japan played in his decision to make a career of ‘Further India’.

Sebastian Dobson is an independent scholar of the history of photography and Japan’s foreign relations in the Bakumatsu and Meiji eras. His most recent publication is an examination of nineteenth-century Japanese studio practice in Portraiture and Early Studio Photography in China and Japan (Routledge, 2017). 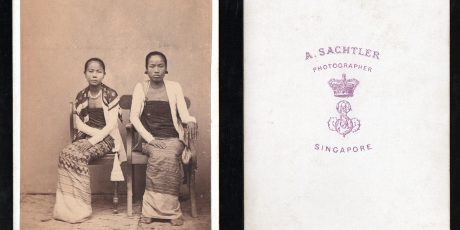 Sebastian Dobson: „August Sachtler: A German Photographer in ‚Further India‘ and Beyond, 1860-73“