Tokyo, as the national capital of Japan and a great city in the world, has experienced a dramatic reconstruction since the end of World War II. However, the trajectory of acquiring world city status was/is not straightforward for Tokyo, rather the process entails conflicts between urban reality and global vision, many of which remain unsolved until today.

By shedding light upon the initiatives of the Tokyo Metropolitan Government (TMG), this lecture provides an integrative narrative of Tokyo’s urban planning, urban problems, and global engagements by the TMG and successive governors since World War II. Instead of examining this process from a purely economical and private perspective as well as from the point of national policy, this lecture views Tokyo as a site of local challenges and visions of a world city.

More specifically, it features the visions and policies proposed and implemented by successive governors of Tokyo: Seiichirō Yasui (1947-59) and his vision of Tokyo as the center of trade in the Asia Pacific (development plan for the Tokyo Harbor and subsequent initiative of the Japan-American Conference of mayors and Chamber of Commerce), Ryūtarō Azuma (1959-67) and his modernized vision of Tokyo as an international city (urban planning prepared for the 1964 Tokyo Olympics and subsequent countermeasures against urban problems), Ryōkichi Minobe (1967-79) and multilateral diplomacy for solving urban problems (his unique use of the Sister-City Affiliation between Tokyo and New York and initiative of the 1972 Conference of Great Cities), and Shunichi Suzuki (1979-95) and his revived/reenergized vision of Tokyo as a world city (seaside development and the preparation for and subsequent failure of the World City Exposition).

Kento Morie is a PhD candidate at the Graduate School of Human and Environmental Studies, Kyoto University. His research interests range from the role of non-state actors in the international realm to the socio-political analysis of the production of knowledge on “the international”. Currently, he is advancing a research project on Tokyo as a global actor in the making based on archival research and in a collaborative way. He will co-organize the panel on „Tokyo Before the 1980s as a World City in the Making: Metabolist Architecture, Inter-City Diplomacy, and Urban Expertise“ at the 2022 Annual Conference of the Association for Asian Studies. He also carries out his PhD dissertation entitled „Envisioning the World Order: U.S. Intellectual Discourses on the International and the Rockefeller Foundation, 1913-1973“. Prior to his doctoral studies, Kento completed his master studies both at the above-mentioned graduate school at Kyoto University and the London School of Economics (MSc in International Relations Theory). 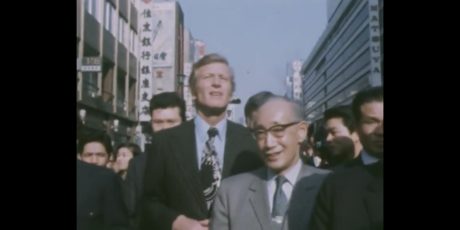 Kento Morie: „Tokyo Reconstructed: The Role of the Tokyo Metropolitan Government in a Globalizing World Post-1945“