VorträgeMittwoch, 12. Juni 2019, 18:30-20:00 UhrDamian Flanagan: „The Unfolding of Japanese Literature as a Nietzschean Adventure“

In Soseki’s private library no book contains as much marginalia as his copy of Thus Spoke Zarathustra, a book whose ideas we can see transformed and given a comic twist throughout Soseki’s landmark novel, I am a Cat.

While Soseki mulled Nietzsche’s ideas, the translator Ikuta Choko appeared in 1909 on his doorstep begging for his help in the gargantuan task of translating Zarathustra into Japanese. Soon Soseki was depicting Ikuta in his novel And Then and loading his subsequent novel The Gate with profoundly Nietzschean philosophic concepts, closely linked to Zen. But, by this time, Soseki and Ikuta had already bitterly fallen out and Ikuta had gone to Mori Ogai instead, inspiring Soseki’s great literary rival to also start deeply contemplating Nietzsche.

The young literary prodigy Akutagawa Ryunosuke meanwhile was so besotted with Nietzsche that despite being in the habit of selling books as he read them so that he could buy others, when he encountered his own copy of Thus Spoke Zarathustra in a bookshop, he couldn’t stop himself buying it back again.

In the post-war era, Mishima Yukio loved Nietzsche so much that after his spectacular death in 1970, his mother left a copy of Nietzsche on his altar to read for all eternity. Mishima’s great works Confessions of a Mask, The Temple of the Golden Pavilion and Kyoko’s House and many others were all underpinned in different ways by Nietzschean concepts.

This talk will tell the epic story of this meeting of Japan’s greatest literary minds with Nietzsche’s revolutionary ideas.

Damian Flanagan is an author and critic, based in the UK and Japan. He studied at Cambridge University before completing a PhD in Japanese Literature at Kobe University in 2000. His books in English include a biography of Yukio Mishima (2014) and The Tower of London: Tales of Victorian London, which won the Japan-US Friendship Commission Award in 2005. His books in Japanese include Natsume Soseki: Superstar of World Literature (2008). He is a columnist for The Japan Times, The Irish Times and the Mainichi Shinbun for whom he pens a column in both English and Japanese, Nihon Bunka o Hazama de Kangaeru (“Edging Towards Japan”).

This lecture is a joint event of OAG in cooperation with the Department for German Language and Literature, The University of Tokyo.
Vorträge 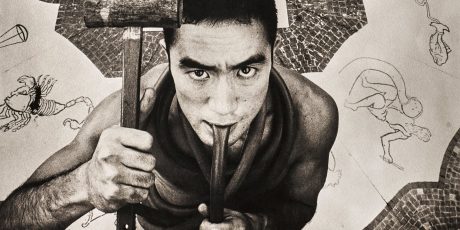 Damian Flanagan: „The Unfolding of Japanese Literature as a Nietzschean Adventure“