When Shakyamuni preached the Dharma 2,600 years ago, he taught many different disciples and students. Knowing that not every disciple had the same mental or emotional composition, he taught differently to different students, to ensure that everyone received the maximum benefit. As a result of this wisdom we have seen various Buddhist schools emerge, meeting the various needs and dispositions of their students. This is in part an explanation of why the various forms of Buddhism in Tibet, in Sri Lanka, in Japan, and so forth look different but are all still authentic teachings from the Buddha for freeing others and oneself from the suffering of samsara.

One of the newer schools to take root is the development of Tibetan Buddhism. The first real transmission of the buddhadharma came from India to Tibet in the 8th century CE, when Guru Padmasambhava brought the teachings of esoteric Buddhism and Abbot Shantarakshita brought the lineage of monastic discipline and philosophical inquiry. A second wave of Buddhist teachings again came from the great Indian monastic university of Nalanda when Master Atisha came to Tibet in the 10th century, reviving the transmission, study and practice of the buddhadharma. Because of its location, Tibet was fortunate to receive transmissions and teachings from Chinese Buddhist monks and scholars to their east and from Indian Buddhist monks and scholars to their south. For this reason the Tibetan Buddhist tradition has the most complete collection of the teachings of the Buddha, having translated into Tibetan all of the authentic Chinese and Indian texts they received.

As the buddhadharma spread and grew within the Land of Snow, various sects emerged within Tibetan Buddhism. These sects, of which there are four major sects remaining today, did not differ in philosophical interpretation of the teachings of the Buddha, but instead followed different lineages of teachers and emphasized different meditational practices. The result is a Buddhist cultural and religious identity that is rooted in the direct and authentic teachings of Shakyamuni Buddha (including those of an esoteric nature), and which, boasting whole diversity within itself, nonetheless presents a unified system of teaching, study, meditation and practice. 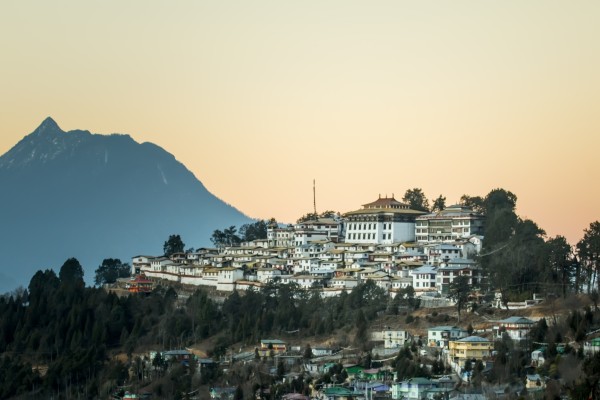 Tulku Tenzin Gyurmey was born in Mon Tawang, located in the state of Arunachal Pradesh, north-eastern India. He joined Sera Jey Monastery at the age of nine and one year later he was recognized by the Dalai Lama as the reincarnation of Drengkhar Khensur Urgen Gonpo, a former abbot of Tawang Monastery.
Tulku Tenzin Gyurmey studied at Sera Je Secondary School for eight years, and upon completing his schooling he joined Sera Je Monastic University to pursue further studies in the fields of Buddhist philosophy and dialectics. He completed his Masters in Paramita, Madhyamika, Vinaya, Abhidharma, Paramana studies over 17 years, the standard duration for those subjects and has completed first year of Geshe Lharampa Examinations with top rank.
In addition to the formal monastic curriculum, Tulku Tenzin Gyurmey made time to study Tibetan and English grammar and literature. He has attended conferences and discussions on Tibetan grammar and literature as well as on science and Buddhism, and he has written articles on both of these topics. He considers himself fortunate to have had numerous opportunities to give talks about Buddhism to Indians and foreigners, both within and outside of the monastery. He has been very fortunate to be English interpreters for His Holiness the Dalai Lama from 2012 on numerous teachings.