Matsuzaki Shinji (松崎晋二, 1850-?) remains a shadowy figure in the history of Japanese photography. The date of his death is unknown, he does not appear to have produced any descendants or disciples and what little has emerged from his portfolio currently consists of only a few dozen landscapes and portraits. Nevertheless, the recorded part of his career, which covers the period 1872-1890, represents a period of intense activity, both as the operator of one of the top commercial studios in Tokyo and as the Meiji government’s photographer of choice when official photo-documentation was required. The sheer range of Matsuzaki’s activities offers several insights into how photography was practiced in Japan in the early decades of the Meiji era, and how it fitted in with contemporary notions of modernity.
Among the themes I propose to examine are:

The Documentary Impulse: The desire to document characterized much of Meiji-era photography, and Matsuzaki’s frequent outings as an official photographer make him an exceptional figure in this regard. Particularly significant are the two commissions he received from the government in 1874 and 1875, which gave him the opportunity to record not only Japan’s first overseas military expedition in the modern era but also to document people of different races who corresponded to Japanese perceptions of the primitive ‘Other’.

The View from Both Sides of the Camera: What did the customer expect from the photographer (and vice versa) in Meiji-era Japan? In a rare 1886 publication (due to be published in English translation later this year), Matsuzaki offers a unique insight into the workings of a portrait studio catering to a sophisticated Japanese metropolitan clientele.

The Future of the Photographer in Japan: By the end of the 1880s, Matsuzaki had withdrawn from mainstream studio activity and was reported to be living in seclusion ‘aloof from the mundane cares of this world’ taking photographs of traditional artworks. Matsuzaki’s final incarnation as a member of Tokyo’s artistic world seems to have been part of a process of self-reinvention which had begun in 1878, and I will suggest that this withdrawal represents Matsuzaki personal statement on the changing status of the photographer – and perhaps photography in general – in Japan towards the end of the nineteenth century. 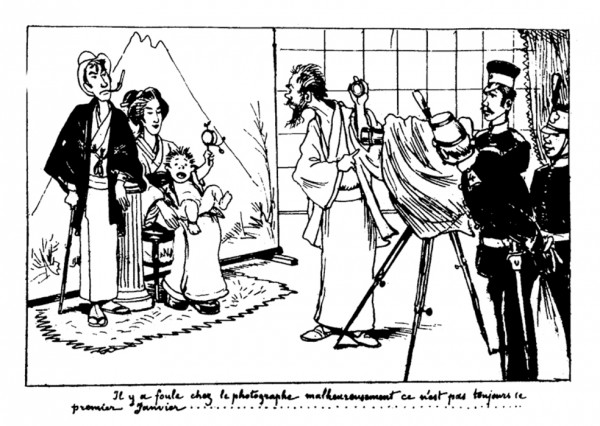 Sebastian Dobson is an independent scholar of the history of photography and Japan’s foreign relations in the Bakumatsu and Meiji eras. His most recent publications include Unter den Augen des Preußen-Adlers (Iudicum, 2011), which he co-edited with Professor Sven Saaler, a contribution to Bakumatsu no shashinshi – Ueno Hikoma no sekai (Yamakawa Shuppansha, 2012) and „The Photographer called »Unshin«: John Wilson (1816-1868)“ in: Shimooka Renjō: A Pioneer of Japanese Photography (Kokushokankokai, 2014). His English translation of Matsuzaki’s ‘Shakyaku no kokoroe’ will be published early 2016.